In February 2008, Aurora Water and Denver Water entered into an Intergovernmental Agreement (IGA) to investigate cooperative water supply opportunities; i.e., the sharing of water and/or infrastructure that could be mutually beneficial. In November 2008, the South Metro Water Supply Authority (SMWSA) joined the investigation through a Memorandum of Understanding (MOU). It was the expectation of the parties that the engineering investigations would lead to the development of a joint water supply project, utilizing available supplies and capacities in the parties’ existing and planned water systems. The relationship between the three parties was solidified with an IGA executed in May 2009, with a final Water Delivery Agreement (WDA) defining the terms of deliveries executed in December 2013. The collective group of water suppliers are now referred to as the Water Infrastructure and Supply Efficiency (WISE) Partnership.
The backbone of WISE is Aurora’s Prairie Waters Project (PWP). PWP, shown in the map below, pumps reusable water from the lower South Platte back to Aurora, where it is treated at the Binney Water Purification Facility. There are times when Aurora has available capacity in PWP and unused treatment capacity at Binney. At times, Aurora also has available reusable supplies in the lower South Platte that could be delivered to PWP.
Denver Water has an extensive water delivery system, including water it diverts from the west slope to the South Platte through the Roberts Tunnel. After Denver makes use of that water, the unconsumed portions of these flows return to the lower South Platte near PWP. These return flows are fully reusable, which, at times, Denver cannot fully use.
The SMWSA is comprised of thirteen water providers in Douglas and Arapahoe counties. The SMWSA relies heavily on non-renewable groundwater, and has been investigating developing renewable surface water supplies for a number of years. Several years of engineering study have identified opportunities to achieve efficiencies within the three systems of the Partnership through sharing and cooperative uses of infrastructure and supplies. A regional water supply project concept was developed and the necessary agreements are in place. Ten of the thirteen SMWSA members have contracted to receive water under the WISE Partnership. The ten members formed the new South Metro WISE Authority (WISE Authority) and are a signatory to the WDA, and include: Centennial Water and Sanitation District, Cottonwood Water and Sanitation District, Dominion Water and Sanitation District, Inverness Water and Sanitation District, Meridian Metropolitan District, Parker Water and Sanitation District, Pinery Water and Wastewater District, Rangeview Metropolitan District, Stonegate Village Metropolitan District, and the Town of Castle Rock. 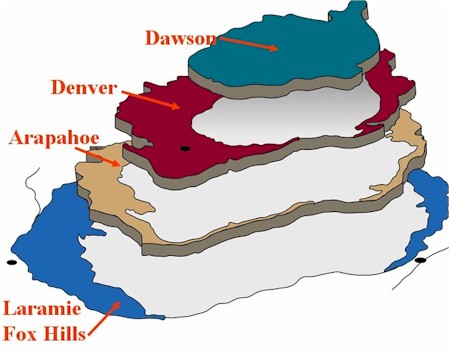 The majority of the water we provide (around 75%) comes from shallow wells along Cherry Creek. These wells are around 70 feet deep and withdraw water from an aquifer along the creek. From the surface, Cherry Creek doesn’t look like much, but the alluvial aquifer is about a quarter of a mile wide and around 70 feet deep. This aquifer is recharged by snow and rain so this is a renewable supply of water. The water rights that the District owns date back to the 1870’s and have produced well for us during the recent drought.

The Pinery also owns a significant amount of water rights in the Denver Basin aquifer. This water is in the deep Denver Basin aquifers, and it is a non-renewable water supply. The District’s rights in this aquifer will provide water for many years to come, but development of this water supply is expensive. For example, the cost to drill and equip a well into the Arapahoe formation of the Denver Basin exceeds $1,000,000. These wells are typically around 2000 feet deep and the cost to pump water from that depth is also expensive.